Diagnostic Methods on the Detection of SARS Virus

An emerging infectious disease known as severe acute respiratory syndrome (SARS)  originated in the Guangdong province of southern China in November 2002 (Stadler et al. 2004). A Chinese doctor who had been treating patients in Guangdong was called a “super spreader” being the first carrier of the virus and spread the infection when he travelled to Hong Kong on 21 February 2003 (Stadler et al. 2004). The outbreak began when the Chinese doctor checked in the Hotel Metropole and developed respiratory tract symptoms 1 week before of his arrival (Wong and Hui 2018). He was administered to the hospital on 22 February 2003 and died the following day (Stadler et al. 2004). Subsequently, he passed on the SARS virus to eight major people who stayed at the hotel and these infected people had also become a “super spreader”. These infected people started to spread the viral disease in countries such as Canada, Singapore, Vietnam and United States as seen in Table 1 (Wong and Hui 2018), making SARS the first contagious disease to be transmitted by air travel (Stadler et al. 2004). 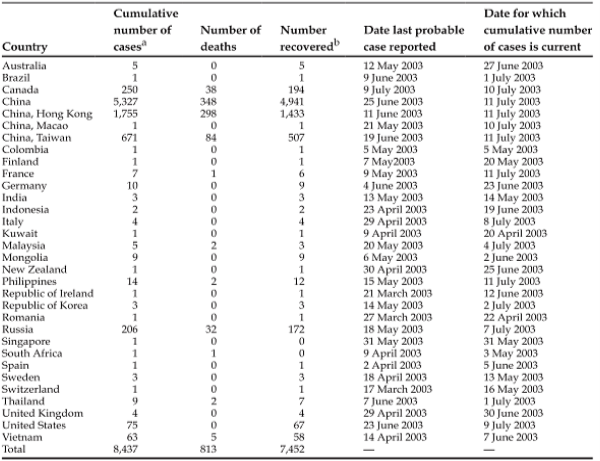 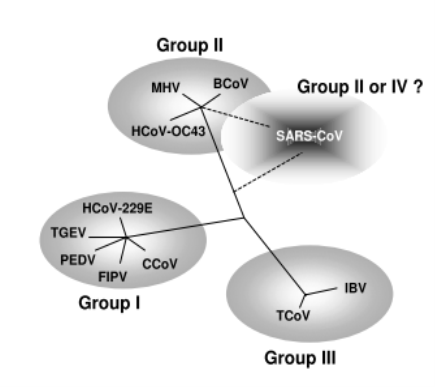 As shown in Figure 1, the genealogy of coronaviruses consists of three groups until now. Groups 1 and 2 are mainly mammalian virus and Group 3 contains only of only avian viruses.

SARS which is caused by a specific coronavirus (CoV) is a profoundly transferable disease with the lungs as the primary pathological target (Peters et al. 2008). SARS coronavirus reside from a family of enveloped coronaviruses. Coronaviruses are a group of large, capsid (envelope), positive-stranded RNA viruses (Rota et al. 2003). As seen in Figure 1, coronaviruses possesses a feature of a corona crown-like appearance in the electron microscope (Stadler et al. 2004). These appearances are caused by the club-shaped peplomers (glycoprotein spike on a viral capsid) that projects outwards from the viral capsid giving its name, coronaviruses (Stadler et al. 2004). The spherical nucleocapsid contains a very large positive-strand RNA genome consisting of approximately 30 kb (Fehr and Perlman 2015).

Figure 2      Morphology of the SARS coronavirus

As shown in Figure 2, a) Electron micrograph of the virus that was cultivated in Vero cells (from kidney epithelial cells extracted from an African green monkey). Large, club-shaped protrusions consisting of spike protein form a crown-like corona that gives the virus its name. b)Schematic representation of the virus. A lipid bilayer comprising the spike protein, the membrane glycoprotein and the capsid protein covers the helical nucleocapsid, which consists of the nucleocapsid protein that is associated with the viral RNA.(Stadler et al. 2004)

The genome structure of SARS-CoV contains an overall 29, 727 nucleotides (Rota et al. 2003). It consists of 9 mRNA transcripts therefore comprising 28 open reading frames (ORFs) (Dostalova et al. 2015). Both the ORF1a and ORF1b makeup 75% of the entire SARS-CoV genome. The genome contains a 5’ cap framework along with a 3’ poly (A) tail, providing for translation of the replication polyproteins to act as a mRNA (Fehr and Perlman 2015). The nucleotides 1-72 comprises an RNA precursor prior to the 5’ UTR (untranslated region) stretching to 192 nucleotides (Stadler et al. 2004).

The 3’ poly (A) tail UTR consists of RNA structures that are necessary for replication and synthesis of SARS-CoV RNA (Fehr and Perlman 2015). As mentioned earlier, the SARS-CoV replication region make up two-thirds of the entire genome that encodes an specific open reading frames for example;  ORF1a and ORF1b (nucleotides 265-21485) (Stadler et al. 2004). These ORFs are translated into large polyproteins called pp1a and pp1b. As seen in Figure 3 and Figure 4, pp1a and pp1b establishes 16 non-structural proteins (Nsp) by a process called proteolytic cleavage (Dostalova et al. 2015). The SARS-CoV RNA’s process of replication and transcription are determined by these Nsps (Dostalova et al. 2015). A complex called replicative/transcription complex caused by the non-structural proteins occur after the maturation of polyproteins. As a result, this complex is remarkably important in synthesising new viral genomes and also “subgenomic mRNA” which encodes structural and accessory proteins (Dostalova et al. 2015). 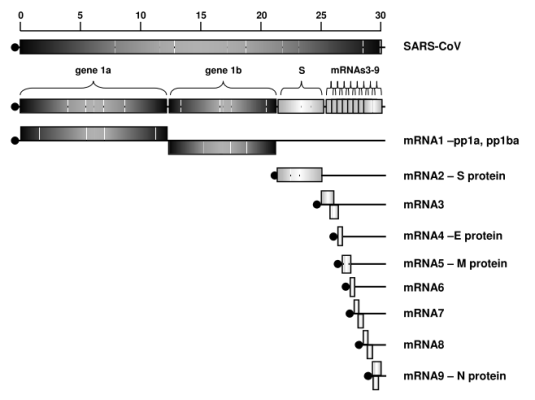 As shown in Figure 3, The structure of the SARS viral RNA is organized into 13–15 open reading frames (ORFs) and contains an overall amount of approximately 30,000 nucleotides. The sequence can be separated into different elements and genomic and sub-genomic mRNAs (Groneberg et al. 2005).

The Nsp 12 in the ORF1b contains the polymerase RNA-dependent which is responsible for the replication and transcription of the viral RNA (Dostalova et al. 2015). In Escherichia coli specifically, the Nsp 13 encoded in the ORF1b possesses a helicase with ATPase and DNA double helix unwinding activities (Stadler et al. 2004). However, the non-structural proteins (nsp 12-16) on the ORF1b are expressed in substantial low levels compared to the nsps in ORF1a (nsp 1-11) (Dostalova et al. 2015).

There are four main structural proteins found in a coronavirus containing the spike (S), membrane (M), envelope (E) and the nucleocapsid (N) proteins and all are positioned within the 3’ end of the coronavirus genome and the remaining two thirds of the viral genome (Fehr and Perlman 2015).

The envelope protein (E) (~8-12 kDa) (Fehr and Perlman 2015) is the smallest protein structure among all four, containing only 76 amino acids (Dostalova et al. 2015). It has been analysed that it does not carry out genome replication or subgenomic mRNA synthesis although it influences morphogenesis, budding, assembly and release of the SARS-CoV (Dostalova et al. 2015). Subsequently, the ion channel activity which is found in the E protein of SARS-CoV is not essential for replication but is necessary for the viral pathogenesis (Fehr and Perlman 2015).

The membrane protein (M) (~25-30 kDa) consisting of 80 amino acids is a transmembrane glycoprotein  composed of triple transmembrane domains that is responsible of about one-third of the integrated protein (Liu et al. 2010). It performs as the most abundant structural protein in the virion because it provides the virion its shape (Fehr and Perlman 2015). The membrane protein produces budding of the virus after it combines with the envelope protein in the “ER-Golgi intermediate compartment” (Dostalova et al. 2015). The formed virions assembles in large vesicles are caused by the interaction of the M protein with the nucleocapsid protein and spike protein (Dostalova et al. 2015). Eventually, these large vesicles assimilate with the cell membrane and are released from the host cell (Dostalova et al. 2015). Additionally, the membrane protein plays a fundamental role in virus humoral response where it is capable of obtaining potent neutralising antibodies in SARS patient (Liu et al. 2010).

The nucleocapsid protein (N) is the core structure of the SARS-CoV virion and is translated on “free polysomes” forming helical ribonucleoprotein complexes (Dostalova et al. 2015). The N protein consist of two individual domain such as the N-terminal domain (NTD) and the C-terminal domain (CTD)  (Fehr and Perlman 2015). Two particular RNA substrates found in the N protein are the TRSs and the genomic packaging signal (Fehr and Perlman 2015). The genomic packaging signal attaches to the C-terminal domain and likewise the N protein attaches to the membrane protein and to a non-structural protein (nsp3) in the replicase region (Fehr and Perlman 2015). As a result, these protein binding causes the viral genome to exist in the replicase-transcriptase complex (RTC) and packages the viral genome into a helical ribonucleocapsid (Chang et al. 2014).

Replicase and structural regions are shown together with the predicted cleavage products in ORF1a and ORF1b. The position of the leader sequence (L), the 3′ poly(A) tract and the ribosomal frameshift site between ORF1a and ORF1b are also indicated. Each box represents a protein product (Nsp, non-structural protein). Colours indicate the level of amino-acid identity with the best-matching protein of other coronaviruses (TABLE 2). The SARS-CoV accessory genes are white. Filled circles indicate the positions of the nine transcription-regulatory sequences (TRSs) that are specific for SARS-CoV (5′ACGAAC3′).

The main way that SARS seems to spread is by close person-to-person contact. The virus that causes SARS is thought to be transmitted most readily by respiratory droplets (droplet spread) produced when an infected person coughs or sneezes. Droplet spread can happen when droplets from the cough or sneeze of an infected person are propelled a short distance (generally up to 3 feet) through the air and deposited on the mucous membranes of the mouth, nose, or eyes of persons who are nearby. The virus also can spread when a person touches a surface or object contaminated with infectious droplets and then touches his or her mouth, nose, or eye(s). In addition, it is possible that the SARS virus might spread more broadly through the air (airborne spread) or by other ways that are not now known.

In the context of SARS, close contact means having cared for or lived with someone with SARS or having direct contact with respiratory secretions or body fluids of a patient with SARS. Examples of close contact include kissing or hugging, sharing eating or drinking utensils, talking to someone within 3 feet, and touching someone directly. Close contact does not include activities like walking by a person or briefly sitting across a waiting room or office.

SARS is caused by a previously unrecognized coronavirus, called SARS-associated coronavirus (SARS-CoV). Coronaviruses are a group of viruses that have a halo or crown-like (corona) appearance when viewed under an electron microscope. These viruses are a common cause of mild to moderate upper-respiratory illness in humans and are associated with respiratory, gastrointestinal, liver and neurologic disease in animals.

These symptoms are commonly seen with other types of infection and are not specific to SARS. During the outbreak, SARS was suspected if a patient had: