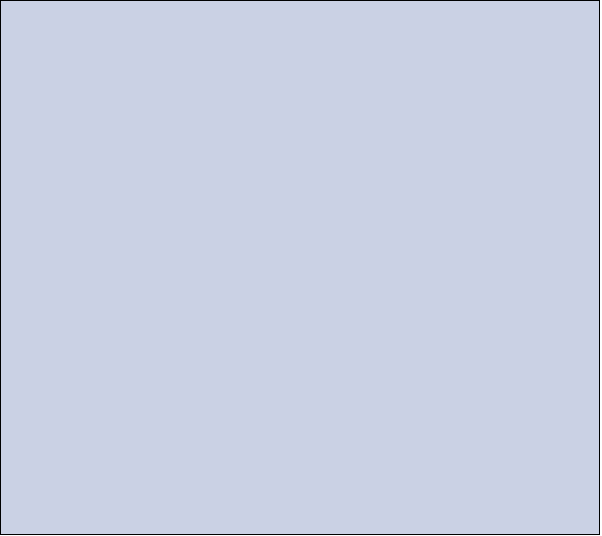 What impact does BDD have on an individual’s life? Page 5

Who is most likely to be affected by BDD?  Page 9

Can other disorders be associated with BDD?  Page 12

This booklet includes information, symptoms, possible causes, treatment advice and more on BDD. It is designed to help people suffering from the disorder as well as information for family and friends.

What is Body Dysmorphic Disorder (BDD)

BDD (also known as dysmorphophobia) is an anxiety disorder related to obsessive-compulsive disorder (OCD). It is based on a person’s judgment regarding their physical appearance, often noticing very minor or non-existent defects. Individuals suffering with BDD obsessively focus on and worry about these certain self-imperfections and flaws (Mind, 2013a).

Many people dislike something about their body or appearance, for most, this will not cause issues or interfere with daily life, however, for BDD sufferers, this can be quite the opposite. These perceived imperfections can cause persistent negative thoughts and unhealthy obsessions which often lead to extreme anxiety and emotional distress (ADAA, 2018a).

People suffering with BDD often find themselves developing repetitive, obsessive, uncontrollable behaviours and urges around the focused feature to try and disguise them (in a similar way to OCD).

The severity of BDD differs between individuals. In more severe cases, the individual may attempt to completely isolate themselves away from people to avoid any potential public humiliation (Mind, 2013c).

It is not uncommon for individuals suffering with BDD to request help from cosmetic surgeons and dermatologists (in attempt to hide their perceived flaws) rather than seeking help from a mental health professional. 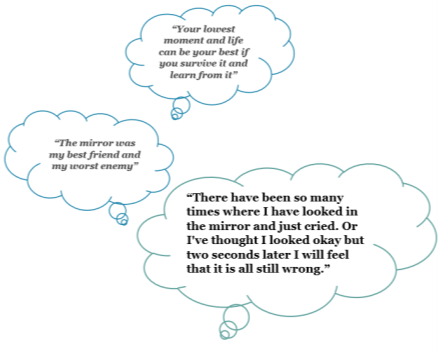 The prognosis for someone with BDD is very assuring when provided with the correct care and treatment. Support from family and friends also play a vital role in helping an individual towards recovery (Cleveland Clinic, 2018).

What impact does BDD have on an individual’s life?

BDD may have a significant impact on a person’s daily life. In severe cases, it may limit and negatively affect family life, social activities and employment due to the feeling of embarrassment and shame. It may also result in isolation or becoming housebound (BDD Foundation, 2016b). However, a diagnosis is not necessarily bad. It can also provide a sense of relief and hope that support and recovery is underway. Mixed emotions are expected following a diagnosis and many will worry about the impacts of disclosure due to discrimination and stigma (HeretoHelp, 2011). 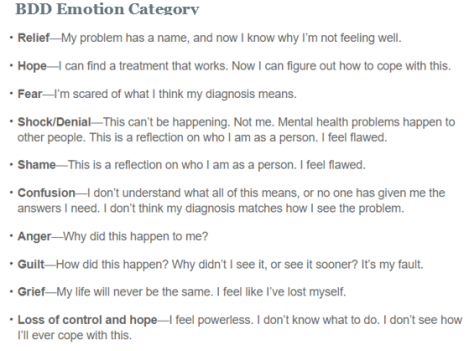 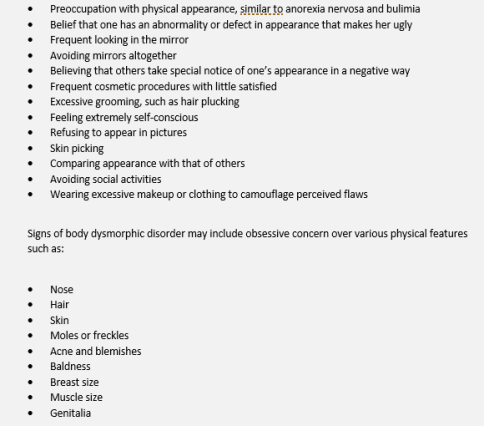 Negative attitudes and stigma towards BDD

Stigma and negative attitudes such as being ‘vain’, ‘self-obsessed’ or ‘a narcissistic’ are unfortunately common towards BDD. Such attitudes may correlate between mental illness ignorance and the obsessively repetitive symptoms, including: looking in mirrors, grooming, cosmetic coverage and workouts (Freeston and Kendall, 2006). This can become internalised and dramatically impact a person’s self-esteem, life and confidence, preventing them from getting help, partaking in events and social opportunities. Depression and anxiety can also follow on from this stigma leading to additional symptoms followed by further stigma (Dinos et al., 2004).

“I think there is a huge amount of stigma around BDD, it is normally associated with vanity. For males, they feel like they will be seen as gay or weird for caring about the way they look and seen as not masculine.’

More severe symptoms or if the above do not work separately

Who is most likely to be affected by BDD?

BDD can affect a person of any age, gender, race or ethnicity. It is believed that the disorder is more prevalent than evidenced as many people hide their symptoms and avoid seeking medical advice due to embarrassment (Phillips, 2018).

Studies indicate, from those affected, around 40% are men and 60% are women. Approximately two thirds of sufferers will start to experience symptoms of the disorder during late adolescents (before age 18), for many, it can take around 15 years to seek professional help (BDD Foundation, 2016a). Studies also report that amongst these statistics, the attempted suicide rate is extortionate at 25% (Granet, 2018).

BDD tends to affect men and women in similar ways. Women may be more concerned by the ‘ideal’ body, including, breast size and symmetry, weight, hip width and legs, whereas men may focus more on aspects such as hair thinning, genitals or their body physique (BDD Foundation, 2016a).

Muscle dysmorphia disorder (MDD) is a form of BDD.

The main concern of MDD is muscle size or physique. People with MDD often perceive themselves as being too small, when they are of ideal proportion or even more muscular than the average person (Phillips, 2004).

Some people will turn to extreme workout routines, anabolic steroids and supplements as well as a strict high protein diet to build muscle; this can lead to several health problems (Leone, Sedory and Gray, 2005).

The exact cause of BDD is unknown, however, several factors are likely involved in its pathogenesis: bullying, low self-esteem, autophobia, biological (genetics and neurotransmitters), other disorders including: depression, anxiety and obsessive-compulsive disorder (OCD) (Mind, 2013a).

Can other disorders be associated with BDD

BDD sufferers may be more prone to anxiety, depression, eating disorders and obsessive-compulsive disorder (OCD). Each have comparable symptoms, sometimes leading to misdiagnosis (ADAA, 2018b).

A type of anxiety disorder affecting approximately 12 in 1000 people. Predominant in adolescents, although all ages may be affected. Around 50% of diagnosed cases are classified as severe (OCDUK, 2018). OCD includes multiple uncontrollable reoccurring thoughts and behaviours. Individuals often act on their compulsion to eliminate upsetting or unpleasant thoughts and feelings. OCD can consume a large portion of a person’s daily life and interfere with vital and social activities (International OCD Foundation, 2018).

A condition affecting approximately 1 in 4 people. Symptoms include a persistent feeling of extreme sadness, anxiety and hopelessness. Women tend to be twice as susceptible to depression as men, it can affect any age group. Depression does not have a singular cause, it solely depends on the individual. However, some common causes include: 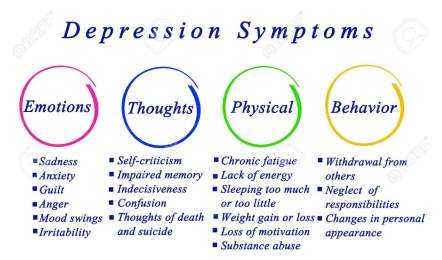 Mind offers fundamental support, and advice with easily accessible, helpful resources and materials for those in need, including information on: different disorders, medication, treatment, self-help (improving well-being), coping strategies and alternate helplines. Also providing direct links and contacts to free online programmes, support groups, peer support and emergencies. However, to pursue recovery, actual treatment is required along with professional help which the agency cannot offer. Further to this, the opening hours are 9am-5pm weekdays; a person’s mental health is not determined by time (Mind, 2013d). 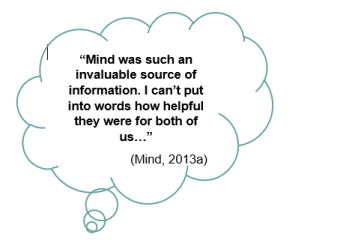 Offers a range of advice, support and free factsheets on mental illness including: medication, information, services, welfare benefits, care and more, all extremely beneficial for those in need. Rethink does not offer crisis support (immediate) and although webchat is available, it is very limited (Rethink, n.d). 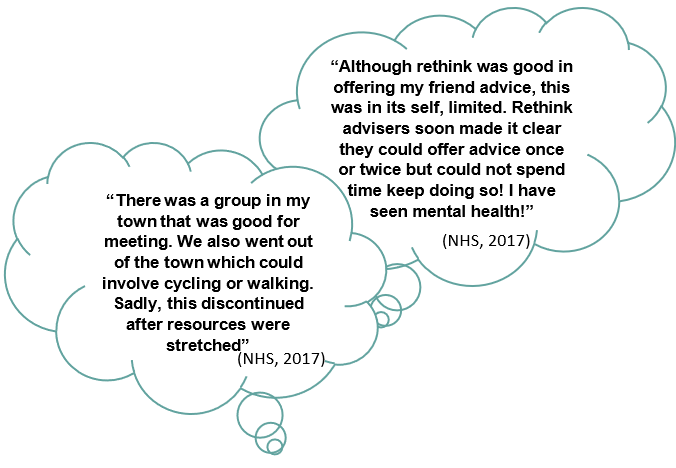