Ankylosing Spondylitis and How It Is Portrayed Radiographically

Ankylosing Spondylitis is a form of arthritis that primarily effects the spine and joints of the pelvis. This disease can also be called Ankylosing Spondylosis, Marie Strumpell Disease, Betchterew’s syndrome, Ankylosing Spondyloarthritis and even Bamboo Spine, for its radiographic appearance as a bamboo shoot. It was once thought (later declined) that the Egyptian Pharaoh; Ramesses II had the condition. Researchers preformed x-rays and evaluated the mummified remains only to discover he had another form of arthritis. More research has been done to investigate the genetic causation of the disease. An interesting study looking at twins discovered there is only a small percentage of risk associated with genes and Ankylosing Spondylitis.

Ankylosing Spondylitis and How It Is Portrayed Radiographically

Ankylosing Spondylitis (AS) is a “Progressive” form of arthritis that mainly affects the spine (Kowalczyk, & Mace, 2009). This disease is thought to be considerably heritable but the causation is not fully understood (Sims, Wordsworth, & Brown, 2004).

Anatomy. In the early stages of Ankylosing Spondylitis, inflammation occurs in the sacroiliac (SI) joint spaces or areas of the bone where ligaments or tendons connect (Bojanowski, 2016). As the disease progresses, joints, specifically the sacroiliac joints, become “ankylosed” (Kowalczyk & Mace, 2009, pg. 32.) Ankylosis is defined as when as inflamed joint forms new bone within itself, causing limited joint movement (Bojanowski, 2016). The damage occurs when the“…articular cartilage is destroyed and fibrous adhesions develop [within the joints and spine]” (Kowalczyk & Mace, 2009). These adhesions cause calcification to occur in the annulus fibrous within the vertebrae disk space and the spinal ligaments both anterior and lateral of the vertebral bodies. Eventually the bones of the spine (vertebra) fuse together (Kowalczyk & Mace, 2009). Though less often, this disease can affect other joints such as the hips, shoulders, and even knees (National Library of Medicine US, 2019).  In advanced stages of the disease the eyes can even be effected, becoming painful and sensitive to light, also known as photophobia (Martin et al., 2005).

Characteristics. There are not many distinguishing characteristics of AS that can be viewed without the use of x-ray. However, one trait that stands out in later stages is kyphosis which gives a hunched appearance and stiffness of the spine (Brent, 2018).

Prevalence. The prevalence is the number of cases (new and old) that occurs in a particular time frame, sometimes expressed as a ratio. As of 2011, the prevalence of Ankylosing Spondylitis in the United States is between 0.2% and 0.5% (Reveille, 2011).

Incidence. The incidence of a disease is a projected number of new cases per year. This can occur in a specific population, time in history or gender. Current information on the incidence of Ankylosing Spondyloarthritis could not be found.

Frequency. The frequency is how often something occurs within a certain amount of time. This could happen in a population or gender. There is a group of diseases called spondyoarthropathies. AS is classified as one of these diseases. It is known to “affect 3.5 to 13 per 1,000 people [in the U.S.]” (National Library of Medicine, 2019). Ankylosing Spondylitis is the most common among these “spondyoarthopathies” (Brent, 2018).  According to Kowalczyk & Mace (2009), AS affects men between twenty and forty years old.

Ethical Group. There are individuals more susceptible to the disease and hold a higher incidence of the B-27 gene. These individuals include Native North Americans, Alaskan Eskimos (Inuits) and Norwegian Lapps (also known as Sami people or indigenous people of the North). On the other side of the spectrum individuals observed with low levels of B-27 gene are from African ancestry, Australian aborigines and Native South Americans (Bojanowski, 2016).

Classification. Ankylosing Spondylosis can fall under many classifications of disease. It is autoimmune because it is thought that the initial flare up of inflammation and later fusion of bone is an immune response (Bojanowski, 2016). It is also thought to be “highly heritable” because of its link to the HLA-B27 gene (Sims, et al., (2004). Kowalczyk & Mace (2009) state “…it is 20 times more common in first-degree relatives of individuals known to have this disorder.” (pg 32). Lastly, Brent (2018) describes Ankylosing Spondylosis as a “chronic, multisystem inflammatory disorder”. Different factors of this complicated disease allow it to fall into many categories and classification of disease.

Causation. It is thought that the HLA-B gene is connected to the development of Ankylosing Spondylitis. HLA stands for Human Leukocyte Antigen (Bojanowski, 2016). The normal HLA-B gene aids in protein production for the immune system, protecting against bacteria and viruses. There are variations of this gene, some normal and some not. An abnormal version is called HLA-B27. This variation is thought to increase one’s chances of having the AS disorder, but the reason behind this is not known. Some individuals carry the gene but never express any symptoms (National Library of Medicine US, 2019).

Diagnosis of AS relies on a physician’s examination. This process involves looking at the joints and spine and obtaining x-rays of the pelvis to better visualize the joint condition (McLoughlin, n.d.). Blood serum analysis is also known to aid diagnosis (Kowalczyk & Mace, 2009). This blood analysis looks for the HLA-B27 gene previously mentioned, that is thought to cause Ankylosing Spondylitis (McLoughlin, n.d.).

Signs. In the spine and L5-S1 joint space heat, redness and swelling can be seen where an individual may be experiencing pain (Carter, 2016). Blood test can show signs of anemia (lack of red blood cells), and traces of the gene thought to link individuals to Ankylosing Spondylosis (Kowalczyk, & Mace, 2009). There are also signs that can be viewed radiographically in the sacral, and vertebral column region. In later stages of the disease patients can become kyphotic, resulting in an arched or “stooped” appearance of the upper back (Brent, 2018).

Symptoms. Initial symptoms include lower back pain that occurs at night and creates stiffness in the morning (Kowalczyk, & Mace, 2009). According to the Arthritis Foundation the symptoms can progress in as little time as several weeks to as long as several months (McLoughlin, n.d.). Some other common symptoms include limited movement in back or joints, fever, weight loss, and fatigue (Kowalczyk & Mace, 2009). After initial symptoms and disease development, ultimately the sacroiliac joints are destroyed and the destruction can be seen (radiographically) up the spine (Kowalczyk & Mace, 2009).

Manifestations. In later stages of this disease joints of the ribs may also be effected and eventually fuse together. This causes difficulty breathing for patients with AS. Other joints can be affected in the extremities such as the shoulders, hips, knees and hands/feet; causing more inflammation and pain. Even the heels can become inflamed in some cases, making it difficult to walk and stand. Individuals with Ankylosing Spondylosis are at risk for developing heart disease and have an increased risk for strokes (McLoughlin, n.d). There is also a risk for osteoporosis in later stages of AS, this can cause fractures in the spine (Bojanowski, 2016).

In the beginning stages of Ankylosing Spondylitis the sacroiliac joints seem to narrow and appear “fuzzy on radiographs. Ultimately the Sacroiliac joints ae destroyed and the destruction can be seen up the spine. In later radiographs, it shows vertebral calcification and ossification of the ligaments in the spine (Kowalczyk & Mace, 2009).

There are certain radiographic signs such as the bamboo spine, dagger sign and shiny corner sign that are present in individuals with AS. Kowalczyk, & Mace state “The spine becomes [a] rigid block of bone”, [hence the name] “bamboo spine” (2009). The dagger sign is when the interspinous and supraspinous ligaments of the vertebra fuse together to create a dagger like appearance on anterior posterior (AP) radiographs of the spine (Resnick & Kransdorf, 2005). The shiny corner sign is seen on a lateral radiograph of the spine. This is when the superior and inferior borders on the anterior aspect of vertebra fuse together (an inflammatory response) and create a triangle shape to the edges (Eisenberg, 2010). 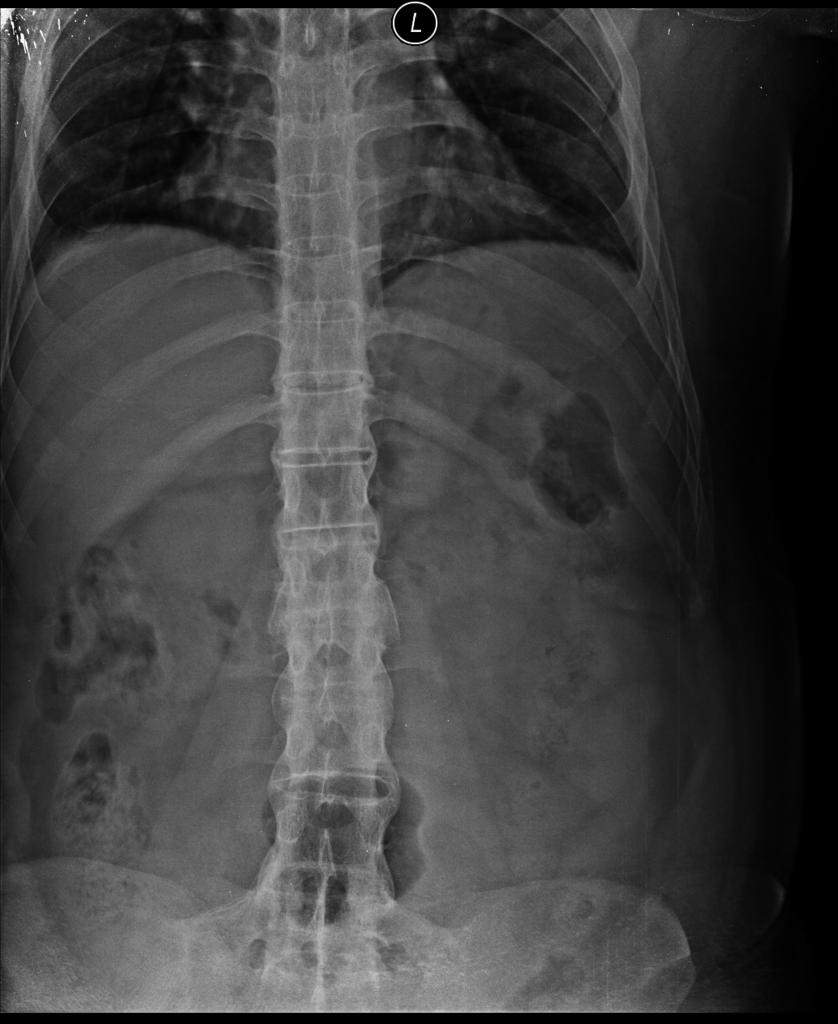 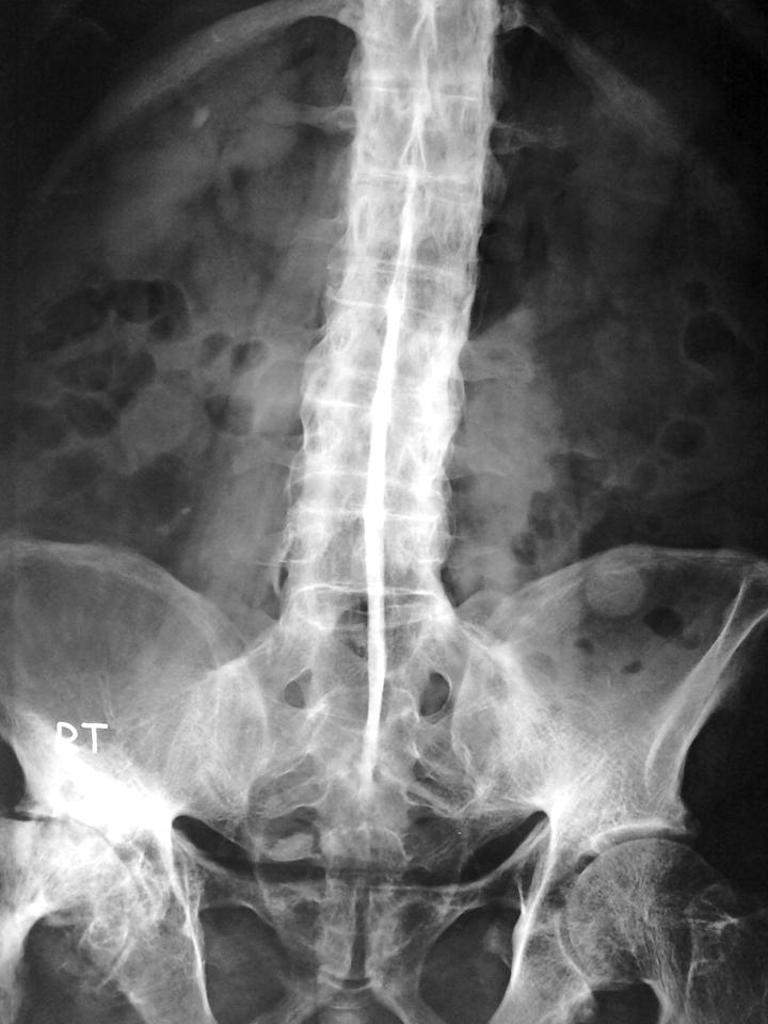 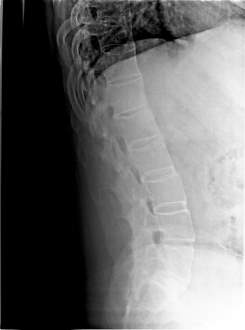 Treatment options vary from simple medications and daily exercise to surgery options in more advanced stages. These methods do not act to treat Ankylosing Spondylosis but to reduce the symptoms. For AS NSAIDs (nonsteroidal anti-inflammatory drugs) are used. Ibuprofen and Aspirin fall under this category. These drugs reduce pain and inflammation experienced. Corticosteroids may be used if NSAIDs do not work on inflammation alone. Another recommended “treatment” is diet and exercise. This helps loosen stiff joints,as by maintaining a healthy body, less stress is put on the already painful joints (Carter, 2016).

Prognosis. The extent of morbidity and quality of life depends on certain factors. These factors include; age at onset of disease, how much peripheral joints (knees, elbows, hips, shoulders etc) are effected, response to drugs such as NSAIDs. Most patients with AS experience a level of disability from the spinal fusion, kyphosis is seen and other joints in the body are affected. In the first ten years of having AS, is when the most “functional loss’ is seen (Brent, 2018).

Morbidity. Some patients with Ankylosing Spondylitis do not suffer from AS symptoms all the time, mild flare ups of pain may occur while others with the disease may experience more chronic pain. In most cases pain will come and go with periods of “remission”. The longer one is diagnosed with the disease the more apt it will diminish their abilities. Cases can worsen with a job that requires physical activity, smoking and other health issues (Carter, 2016).

Mortality. Patients with AS do not die because of the ankylosing itself but other manifestations it creates. The most common cause of death in individuals with Ankylosing Spondylitis is cardiovascular disease. CVD is present in more cases of AS than in cases with the same sex and age of individuals without AS (Wright, Crowson, Michet & Matteson, 2015).