The National Health Service (NHS) provides healthcare for all UK citizens based on their need for healthcare rather than their ability to pay for it. NHS is funded by taxes. This report identifies the problem with NHS with problem solving tools and techniques. For finding this problem Casual Loop and BOT methodologies has been used.

On 5 July 1948, NHS was launched by Health Secretary Aneurin Bevan and for the first time health care became free to all UK citizen. In 1952, Patients started being charged for prescription. First mass vaccination programme for polio and diphtheria started in 1958. Before this, there were 8000 cases of polio and 70000 of diphtheria each year. In 1961, contraceptive pills were launched which gives women control over how many children they have.

In 1962, Health Minister Enoch Powell put forward The Hospital Plan which set out a 10 year vision for hospital building. Every population of 125,000 was to get a hospital or district general hospital as they become known. In 1967 Abortion Act was passed by a free vote of MPs and introduced by Liberal MP David Steel which made abortion legal up to 28 weeks if a woman’s mental or physical health was at risk and further limit reduced to 24 weeks in 1990.

In 1968, UK’s first heart transplant surgery was carried out in the National Heart Hospital in London with 18 doctors and nurses operating a 45 year old man for seven hours. CT scanners were used for first time in 1972. CT scanners started to be used on patients through the development of the previous five years. CT scan machines take pictures of the body to develop 3D images, revolutionising investigations of the body. World’s first test tube baby was born on 25 July 1978 before midnight in Oldham District General Hospital. To reduce breast cancer deaths in women over 50, breast screening was introduced in 1988 and along with improved drug treatment screening was estimated to have cut deaths by a fifth.

In 1990 NHS and Community Care Act was introduced by the legislation which was known as the NHS internal market with health authorities given their own budgets to buy care for local populations from hospitals. In 1994 organ donor register created to co-ordinate supply and demand. It was the result of a five year campaign by John and Rosemary Cox whose son Peter died in 1989 and he had asked for his organs to be used to help others. In 2006, patients were given the choice of four or five hospitals, ending the long held tradition of going where GPs decides. The scheme has now been extended to include all hospitals in England but not adopted elsewhere in UK.

A review of the political, economic, social and technical (PEST) environment involves analysing the environment for any organisation. UK based healthcare provider for the public, NHS funded by contributions made from taxes distributed by the government to each of the trusts. NHS operates within a politically stable economy with funds pledged by both previous and current governments to the service for improvements in healthcare and salaries for staff.

NHS facing the economic environment is a growing economy with a rising elderly population and less working people to support them. It has become increasingly difficult to recruit medical staff and shortages have often been counteracted by employing staff from other European Union countries which in turn increases the population within the UK. The social environment shapes beliefs, values and norms (Kotler). Belief is the core values of the health service and the services it offers was high on the public’s list of concerns during the last general election as if NHS is an internal part of the UK and its culture. The technological environment is moving fast within the health care sector with continually development of drugs, advancement of techniques for operations and the use of technologies for both medical and administrative procedures.

There is no real competitor for the NHS although it doesn’t have monopoly in the market.

Accident and Emergency service is unique to the NHS though private hospitals are available throughout the UK.

The NHS has continued to grow and expand upon its services since it was established in 1948.

Due to increasing population NHS is unable to cope with the demand.

High waiting time for the patients.

Bad behaviours and attitudes of some staff.

Uses of marketing strategies to raise the profile of the NHS.

Partnerships and joint ventures with private and voluntary sector.

Shift of services to primary care.

One or more feedback loops that are either reinforcing or balancing processes.

Cause and effect relationships among the variables.

Where feedback reduces the impact of change, it is a Balancing loop. Balancing loops try to bring things to a desired state and keep them there.

Causal Loop Diagram has two kinds of relationships between variables:

When variable A changes, variable B changes in the same(S) direction. It is indicated by (S) in the diagram.

When variable A changes, variable B changes in the opposite (O) direction. It is indicated by (O) in the diagram.

The Causal Loop Diagram for NHS contains variables which are as follow:

Waiting time: – This is time a patient has to wait before he/she can be treated by NHS.

Number of Complaints: – Dissatisfaction of the patients due to increase in waiting times leads to an increase in complaints against the NHS. This increases pressure on the government and the Department of Health by acts of the National Audit Office.

Investment in facilities, Medical equipment and information technology: – An increase in the NHS budget allows the NHS to hire more medical staff and improve the capacities in hospitals. More patients can be treated within short time and the waiting lists can become shorter as the budget increases.

Partnership with Private Health Care: – NHS cannot cope with the excessive demand when the waiting lists become too long. So it tends to outsource its service to private health care e.g. BUPA, NHS express surgery units in partnership with state run German and French health care firms. This is quick and short way to fix the problem and tends to bring down the waiting time in the short run.

The causal loop diagram suggests that a deeper set of forces is at work and the problem situation to be modelled is complex and dynamic. It is necessary to consider both hard variable (number of beds and hospitals) and soft variables (morale of staff). There are 6 loops in the system. There are 2 positive loops or reinforcing loops and 4 loops are negative or balancing loops.

In loop 1, increasing number of patients on waiting list increases the waiting time which leads to dissatisfaction and complaints against the NHS. This also switches some patients to private health care. Increasing pressure from public and media forces the government to increase the NHS budget. This tends to have positive effect on the system by increasing NHS capacity and reducing the waiting list.

Loop 1 is affected by loop 5 which is positive and reinforcing loop. Some patients decide to return to NHS from private health care as waiting list is decline. This increases the waiting list once again. Hence, there are no proper solutions to the problem or solution is difficult to achieve.

Many obvious solutions to the problem like increasing the NHS budget failed in the past. The causal loop diagram contains more negative loops than positive loops. Hence the system appears to be a negative system that tends to counter uncontrolled deviation and stabilise if the waiting list increases significantly.

NHS is the UK health care service run by the government funded through the taxes. This report shows environmental condition of NHS through PEST analysis and Strengths, weaknesses, opportunities and threats of NHS through the SWOT analysis. The causal loop diagram for NHS point out the main problem of NHS which is increasing waiting time for patients and a temporary increase in resources (NHS budget) gave short run solution for the problem.

NHS should overcome its weakness through its strength and reduce its threats through appropriate use of its opportunities.

Increase its work force and equipment.

NHS should stop the contract based employee and there should be better coordination between doctors, nurses and other employees.

The SWOT (strengths, weaknesses, opportunities, and threats) analysis is an important part of the strategic planning process and should be reviewed on an ongoing basis. The SWOT analysis backs up the business plan that serves as a map for employees to seek guidance on how to direct the organization. 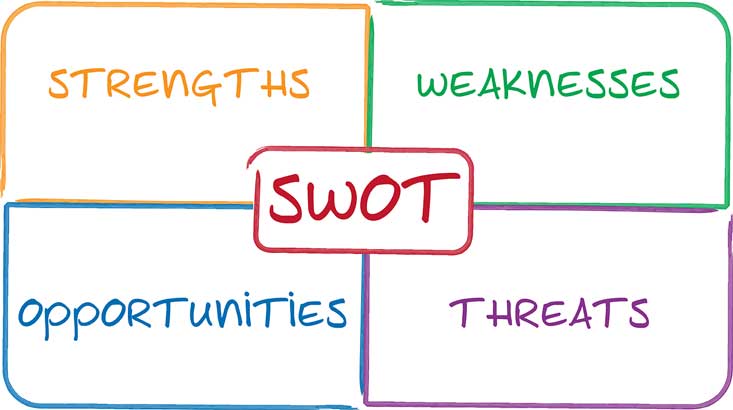 The SWOT (strengths, weaknesses, opportunities, and threats) analysis is an important part of the strategic planning process and should be reviewed....

Introduction Hospital Corporation of America uses a SWOT analysis to help scan internal and external complexities. Internal factors include the hospital strength and weakness and threats...

Student Name: Aphrodis Ndayisaba 0. Introduction The complexity and dynamism of healthcare systems around the world make them require strong, knowledgeable and skilful managers and leaders. The need ...