This essay describes the nursing assessment and care planning provided to a patient with Chronic Obstructive Pulmonary Disease (COPD), as experienced during a clinical placement. In addition, the health breakdown of the patient is described, followed by the delivery of an appropriate intervention and how this will be evaluated. Firstly, a brief description of the patient is provided.

The true identity of the patient will remain anonymous in adherence with the Nursing and Midwifery Code of Conduct on patient confidentiality (NMC, 2008). However, the patient will be referred to by the pseudonym ‘Sally’ for the purpose of this essay.

Sally is 50-years old and was diagnosed with COPD approximately 2-years ago. She lives alone and has no close family. Her health has been deteriorating rapidly over the last couple of months, with the primary problem being restricted mobility. She is finding it increasingly difficult to attend to activities of daily living or to maintain social contact. This is in part due to becoming easily out of breath as a result of the COPD. Her condition is exacerbated by her weight, as she is clinically obese. At 5ft 4inches and weighing 16 stones (224 pounds), Sally’s body mass index (BMI) is 38.4kg/m2. Sally mainly consumes a diet of microwave meals and convenience foods because she finds it too much effort to cook a meal for one. She is in a vicious cycle that perpetuates her mobility issues, whereby the less active she becomes, the more she gains weight and the more sever her symptoms of breathlessness become.

A patient-centred holistic approach was taken in assessing Sally’s health and care needs. This approach is based on the belief that “in the treatment of medical conditions, all of one’s physical, mental, emotional and social conditions – not just physical symptoms – should be taken into account” (American Holistic Nursing Association, 2010, p.1). In line with this approach, Sally was placed at the centre of her own health care, providing her with active involvement in the assessment process and the development of her care plan. This approach is promoted by the Department of Health in their efforts to encourage self-management and self-responsibility in people with long-term chronic conditions such as COPD (Department of Health, 2008).

Historically, Sally’s assessment would have adhered primarily to the medical model and involved measures of airflow and lung volume in order to assess COPD severity. This would not have provided Sally with the appropriate level of care as important issues surrounding her diet, living circumstances, and psychological well-being might have been missed. In order for Sally to be provided with individualised care, her COPD and mobility issues require the holistic approach that has recently been advocated by the National Institute of Clinical Excellence (NICE, 2010).

Recognising that the assessment should not merely focus on Sally’s physical condition if an appropriate care plan is to be devised (Shapiro et al., 2007), the Roper, Logan and Tierney Activities of Living Model (Roper et al, 2000) was utilised (appendix 1). This is a holistic model based on the twelve activities of living (ALs) essential to health and well-being. The model comprises five components, which guided Sally’s assessment (Box 1):

1) Level of independence in each of the ALs is assessed.

2) Level of nursing intervention required relates to the patient’s level of dependence or on the nurse regarding these ALs.

3) Position on a lifespan continuum from birth to death has a bearing on levels of independence.

5) Individualised nursing according to ALs, dependency levels, age, and influencing factors is required.

– Maintaining a safe environment D I

– Eating and drinking D I

– Working and playing D I

Sally has reduced mobility due to COPD-related breathlessness and obesity.

Sally used to smoke, but quit 2-years ago when diagnosed with COPD.

Psychological: Sally expresses feelings of loneliness and is tearful, both of which indicate possible depression, which could be due to social isolation.

Environmental: Sally is finding it difficult to maintain a tidy house.

The Roper, Logan and Tierney Activities of Living Model is particularly relevant to Sally’s circumstances as her greatest problems are in activities of daily living. This model provides specificity of where these problems are greatest. The core problem is mobility, which seems to exacerbate some of the other problems, including her COPD symptoms, weight, and social life.

Remaining patient-centred, Sally was asked if there was anything she felt might improve her mobility. Sally felt that the breathlessness had got worse with her weight gain and auggested that weight loss might assist. The assessment reached similar conclusions since weight loss is most often associated with worsening COPD, whilst weight gain is more likely in those without airway obstruction. This would indicate that the weight was impacting the COPD rather than vice versa.

The open-ended questioning approach used with Sally follows the theoretical framework offered within motivational interviewing, which has been found to be effective in motivating lifestyle-related behaviour change (Miller and Rollnick, 2009). It is often used alongside the stages of change model, as was the case here. According to this model there are five stages to lifestyle-related behaviour change (Prochaska, DiClemente, and Norcross 1992): 1) pre-contemplation (i.e. the individual is unaware of a problem and does not intend to change their behaviour; 2) contemplation (i.e. the individual is aware of the health risks of their lifestyle and is thinking about change; 3) preparation (i.e. the individual expresses serious intentions to change their lifestyle; 4) action (i.e. the first few weeks and months of actively taking steps towards behavior change; and, 5) maintenance (i.e. about 6-months to 5-years after initiation of the behavior change decision, when the individual takes action towards relapse prevention).

Sally was clearly at the preparation stage, but needed practical, medical, and emotional support to enter the action stage.

Medical interventions are limited for people with COPD and thus a key role for nurses is to promote healthy behaviours in people with COPD. A multidisciplinary intervention was required to meet Sally’s care needs. Firstly, NICE (2004) guidelines recommend that BMI is calculated for people with COPD and that if weight loss or gain changes over time they are referred to a dietician. Such a referral was made for Sally and would provide the initial provision of education, advice and support in terms of her dietary needs.

In addition, a self-management care plan was introduced to Sally, as developed by the British Lung Foundation (2011). The plan was designed to help people with COPD manage their condition effectively and includes sections on medication, oxygen status, symptom monitoring, breathing techniques, healthy eating, and exercise tips. Sally’s current problems with mobility resulting from excess weight and breathing difficulties are multifactorial and thus such a holistic approach is likely to be more efficacious than merely providing guidance on weight loss. Indeed, self-management education has been found to reduce hospital admissions, improve symptoms of breathlessness and enhance quality of life in people with COPD (Effing et al., 2007).

It was recognised that Sally’s isolation and loneliness might also be contributing to her problems and thus she was informed of the benefits of establishing connections with other people who have COPD. Sally did express some interest in this, especially in terms of meeting people via a programme of pulmonary rehabilitation, such as the local BreatheEasy programme (BLF, 2011). Pulmonary rehabilitation can reduce disability and improve quality of life. By improving physical fitness, breathlessness is reduced and independence increased. Whilst it doesn’t improve lung function, it can play a significant role in increasing exercise tolerance.

Sally was particularly interested in finding a local BLF Active (2011). This is a scheme set up by the British Lung Foundation, which supports people with COPD in remaining physically active. Sally decided to try this option, but was open to also exploring joining an Expert Patient course, designed to increase confidence to self-manage. She was keen to be actively involved in her care, but also expressed low self-efficacy and thus a need to gradually integrate social and lifestyle changes into her life. Group-delivered self-management programmes are notorious for increasing patient self-efficacy through the provision of vicarious experience (i.e. learning from others with the same condition) (Ashford, Edmunds, and French, 2010). Furthermore, many self-management groups are educational and based on setting achievable goals, both of which increase an individual’s sense of mastery.

Changes in lung function as a result of interventions are often minimal for people with COPD. Thus, intervention effectiveness requires an assessment of other outcomes, such as improvements in activities of daily living and quality of life.

Regular monitoring and reassessment of Sally’s needs will be required in order to identify the effectiveness of the support provided to her, as well as to identify where changes might be needed. This will be achieved by regular assessments using the Roper, Logan and Tierney’s Activities of Living Model in order to monitor levels of dependency, especially in terms of mobility.

As part of her self-management plan, Sally will also be closely monitoring her symptoms, including levels of breathlessness and changes in cough sputum. Spirometry readings will be taken by the nurse during each assessment in order to monitor COPD severity in comparison to Sally’s current severity rating of moderate. Sally’s weight will be monitored through contact with the dietician who she has been referred to.

In line with government efforts to measure the quality of healthcare services via patient-reported outcomes (DH, 2009), Sally will also be asked to complete the Clinical COPD Questionnaire (CCQ) (Molen et al., 2003) before, during, and after the intervention. This 10-item questionnaire comprises the following domains: functional state; symptoms; mental state. This is instrument is easy to administer and complete for the assessment of patient-reported symptom severity, ability to partake in physical and social activities, and psychological well-being.

Level of dependence (D) or independence (I) on 12 Activities of Living (ALs):

– Maintaining a safe environment D I

– Eating and drinking D I

– Working and playing D I

The patient’s position on a lifespan continuum from birth to death:

Individualised care according to these ALs, level of dependence or independence in regard to ALs, position on the life continuum, and the influencing factors of ALs. References

The Roper Logan model was named after the author of the model, Nancy Roper, Logan and Tierney. It was first developed in 1980 based upon the work by Nancy Roper in 1976. The model is based on the 12 activities of living in order to live. 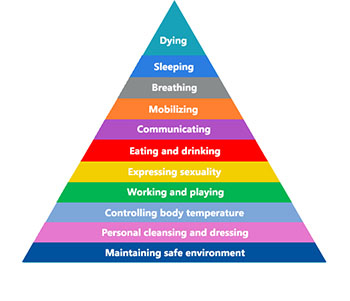 The Roper Logan model was named after the author of the model, Nancy Roper, Logan and Tierney. It was first developed in 1980 based upon the work by Nancy Roper in 1976...

PATIENTS’ CASE STUDY. This essay aims to describe a patient’s health condition and needs during their stay at the hospital. Patient chosen has a chronic diarrhoea and abdominal cramping, h...

The focus of this assessment is to assess a service user who has been admitted onto a ward where a student was present and plan care, based on their needs that were highlighted in the holistic assessm...