Homelessness has a broad meaning; it can be used for people living in homes that are unsuitable, as well as for people who are sleeping rough. Homelessness means not having a home. A home is a place that provides security, and links to a community and support network. It needs to be decent and affordable. Under the law, even if someone has a roof over their head they can still be homeless. This is because they may not have the right to stay where they live or their home may be unsuitable to live in. Rough sleeping on the other hand,is defined by the Government as ‘people sleeping, or bedded down, in the open air (such as on the streets, or in doorways, parks or bus shelters); people in buildings or other places not designed for habitation (such as barns, sheds, car parks, cars, derelict boats, stations, or ‘bashes’). Street homelessness is a much wider term than rough sleeping, taking into accounts the street lifestyles of some people who may not actually sleep on the streets. Street homeless people are those who routinely find themselves on the streets during the day with nowhere to go at night. Some will end up sleeping outside, or in a derelict or other building not designed for human habitation, perhaps for long periods. Others will sleep at a friend’s for a very short time, or stay in a hostel, night-shelter or squat, or spend nights in prison or hospital.

The Government has achieved its target of reducing the number of people sleeping rough by two thirds. In many parts of the country there are outreach teams to help those on the streets, hostels providing the first step off the streets, as well as day centres and other agencies offering training and support to access employment and cultural projects. However, still too many people are not receiving the help they need, at the time they need it, and end up sleeping rough on the streets. Although the reasons for becoming homeless differ between each person, there are common factors. Some are personal; related to the family, community and individual, and others are structural; relating to the economy, the law, social trends, and the national housing system. Homelessness is likely to be caused by a combination of structural and personal factors. There are, however risk factors which make it more likely that a person could become street homeless. These include:

*percentages may not add up to 100 due to ‘unknown’ characteristics recorded in a small number of cases.

NB. Characteristics have not been compared with other authorities due to low numbers involved in many cases, often resulting in extreme percentages.

The decrease in rough sleeping in Nottingham now means that 1% of rough sleepers in the country (excluding London) are in Nottingham, falling from 1.2% in 2017. However, of the eight English core cities, only three achieved a reduction in the estimated number of rough sleepers compared to the previous year.  Behind Liverpool, who achieved a reduction of 55%, Nottingham achieved the second highest reduction of the core cities. Of the 3 cities within the East Midlands region (Derby, Nottingham and Leicester), Nottingham experienced the second highest reduction in the estimated number of rough sleepers, behind Derby at 30%.  Leicester saw no change in its number therefore none of the East Midlands cities saw an increase from 2017.  Both Derby and Leicester have a ‘per 1,000 households’ rate of 2.5 which is very similar to that of Nottingham at 2.6.

Elsewhere in the county, Bassetlaw was the only area to experience a decrease in rough sleeping, from a count of 9 in 2017 to 2 in 2018.  Mansfield Broxtowe, Newark & Sherwood and Bassetlaw all experienced rises, although at 48 the number of rough sleepers counted within this large area is comparatively low. Only Mansfield and Bassetlaw have higher ‘per 1,000 households’ rates than Nottingham.

Since the 1990s, successive governments have attempted to combat rough sleeping. Key developments in policies around street homelessness over this period are outlined below.

In response to the increased visibility of rough sleeping in late 1980s, the Government launched the Rough Sleeping Initiative (RSI) in 1990. The RSI operated in central London from 1990 to 1999 and was extended to 36 other areas in England in 1997. The programme funded outreach work, hostel places, move-on accommodation and resettlement services.

In 1999, the Rough Sleepers’ Unit was established to carry out the Government’s strategy to reduce the number of people sleeping rough by two-thirds by 2002. This target was achieved and the unit, now called the Homelessness and Housing Support Directorate within the Department for Communities and Local Government, continues to lead on homelessness issues.

The Rough Sleepers’ Unit set up 22 Contact and Assessment Teams (CATs) around the country. Seven of these were assigned to London. The CATs comprise of mental health and substance misuse workers, generic street workers, and youth and resettlement workers. In certain local authorities the remit of outreach teams has widened. For example, in the London borough of Camden, the CAT deals with issues such as begging and street drinking, as well as rough sleeping.

During 2002 the homelessness legislation was amended to extend the groups of people who are considered to be in priority need for rehousing. This includes several groups who are over-represented in the street homeless population. These new groups include young people between 16 and 17 years old, care leavers aged 18, 19 and 20, and people who are vulnerable as a result of being in prison, in the armed forces and those who are vulnerable as a result of fleeing violence.

In March 2005, the Office of the Deputy Prime Minister launched its five-year homelessness strategy. One aim of the strategy is to help more people to move out of rough sleeping. To help deliver this, the Government is investing £90 million in the Hostels Capital Improvements’ Programme which will seek to improve the physical standards of hostels, and also ensure that services offered respond to current needs.

The aim of the strategy is to achieve:

Evidenced through a decrease in the amount of households approaching the local authority (or partner agencies) for support in crisis, once homelessness has already happened 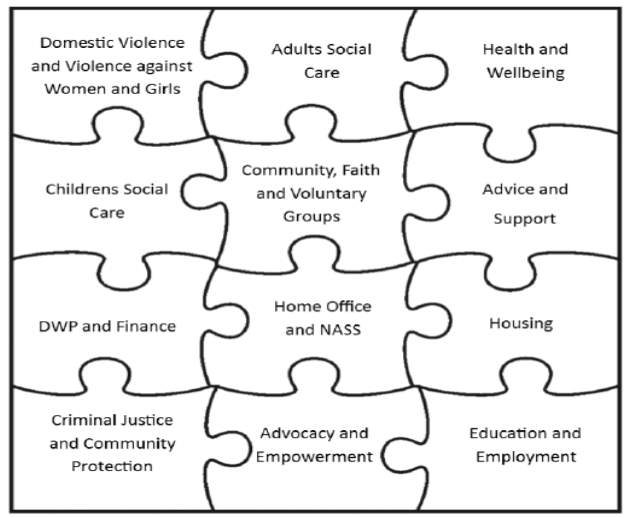 Partners in Nottingham agreed that a Nottingham Homelessness Prevention Charter should accompany this Homelessness Prevention Strategy. The Charter outlines the vision for the city alongside a series of values, which all partners are signed up to, solidifying the undertaking to work collaboratively to prevent, relieve and respond to homelessness in Nottingham.  The Charter requires organizations and community groups to make their own strategic commitment to homelessness prevention in the form of a pledge (or a number of pledges). Each focused pledge will outline how that organization or service area specifically intends to prioritize homelessness prevention and how they will continue to input and engage with the citywide partnership on an ongoing basis.

To ensure that the new strategy recognizes and maximizes partner’s contributions and receives the operational involvement required from all sectors to deliver this strategy, partners have outlined their own actions to lead on. These actions will be reviewed by the Strategy Implementation Group and combined with core overarching / multi-sector actions to form the comprehensive annual strategy action plan.

Homelessness occurs for a variety of different reasons. Economic strain, loss of jobs as well as the inability to find more work, drug and alcohol abuse, mental illness, and gross financial management just to name a few. It is imperative that primary prevention strategies such as information, education, and interventions be given to those persons at risk of becoming homeless.

This paper will go into depth about homelessness - the population that is most affected the theoretical framework-perspective, practice methods, service effectiveness, etc....

Homelessness and Women: Causes and Impacts

Homelessness and Women Homelessness is a growing social problem that affects any individual in the United States. Homelessness does not discriminate against men, women, and children. It ...

The Prevention Of Homelessness Health And Social Care Essay

Homelessness occurs for a variety of different reasons. Economic strain, loss of jobs as well as the inability to find more work, drug and alcohol abuse, mental illness, and gross financial managemen...