A stroke (cerebrovascular disease) occurs when the blood supply does not reach different parts of the brain, causing brain cells to die as they do not receive oxygen. This can be caused in two ways: blood clots blocking an artery (ischemic) or, a sudden blood vessel in the brain bursting (haemorrhagic).

The service user would usually attend the Accident and Emergency department or call 999 with the following signs and symptoms: (1)

Magnetic resonance imaging (MRI), Computed Tomography (CT) and Carotid ultrasound are usually used to diagnosis a stroke. A specialist should refer the service user within the first 3 hours of a stroke to the CT and/or MRI department. (2)

Generating of 2 dimensional (2D) radiographic image of a section from the 3D object.

How is the Image produced?

The patient lies down on the CT couch and is centred in the horizontal position. The radiographer then uses control panels to move the CT couch into the CT aperture. Highly collimated X-ray photons pass through the service user’s head and reach the detector, a signal is then transmitted for image acquisition and reconstruction. (Figure 1)

X-ray is one of the fundamental foundations of computed tomography and has greatly influenced the development of this science. A CT machine generates a high voltage (80-140 kV) fast pulse X-ray transmission by a wide fan shape beam (electron beam) and multiple detectors to produce a radiographic image.(4)

The detector is also one of the most important parts in the performance of a CT scanner to record incident ionizing radiation and convert it to the corresponding electrical signal. The detector is filled with high-pressure xenon gas and/or solid scintillator, such as cadmium tungstate in the form of crystals, which couples with the photodiode. (5) 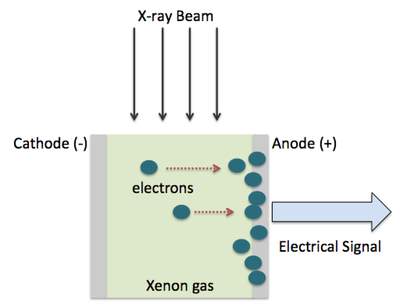 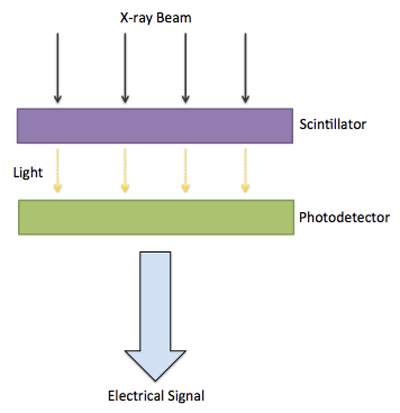 Indirect conversion radiography is used within the solid-state scintillator multi-detector to amplify and convert of analogue signal to digital signal (ADC). Figure (2)

The spiral/helical scan is usually used for CT head scans which constitutes the fast and constant volumetric scan in non-planar geometry where the patient is constantly scanned. The table moves at the same time with the gantry rotation around the patient and resulting in a helical X-ray pattern along the z-axis.(8) figure 3 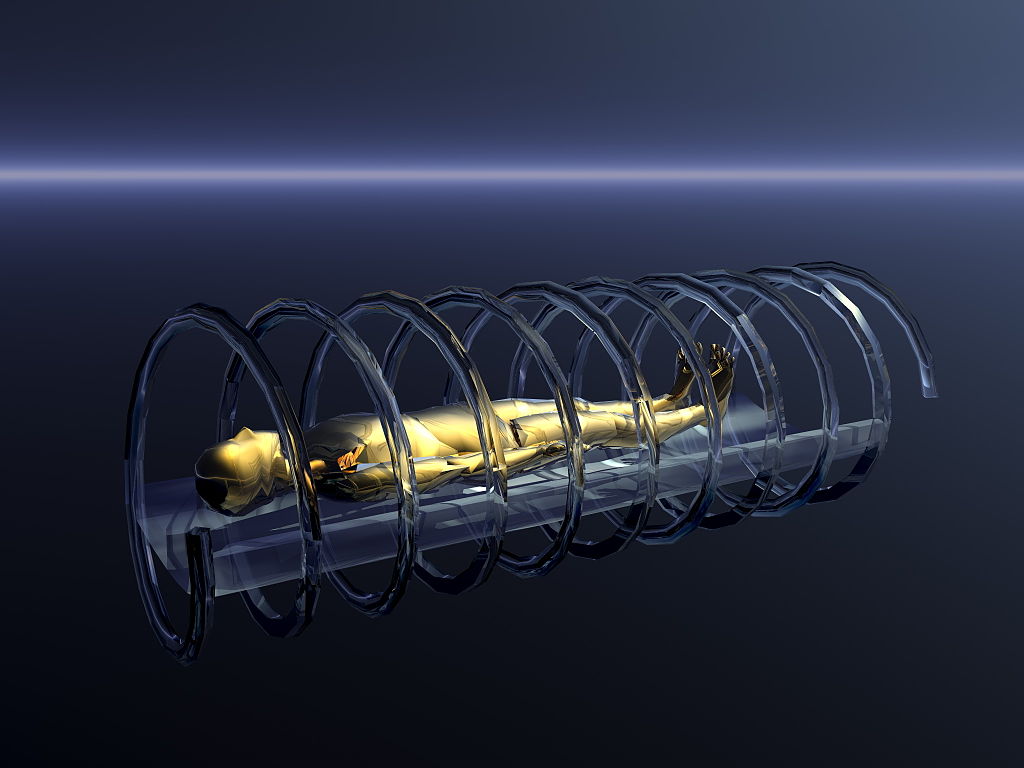 Using the above methods, the X-ray photons produced by the X-ray tube pass through a three-dimensional body structure and produce two-dimensional images, which can be involved in the sagittal, axial and coronal plane (cross-sectional imaging). (6)

Data from a series of projections which have a set of individual measurement of X-ray attenuation are converted into an image from the body structure by different mathematical methods.

A mathematical algorithm from X-ray intensities takes the raw data which is proportional to the attenuation coefficient reconstruct the cross-sectional CT image. This data then collected and pre-processed in the integral form (mathematical equation). Convolution kernels method is used to avoid unsharpness (star artefact) prior to back projection. (7)

After using those method, each voxel which is made by a pixel in volume is normalised with Hounsfield unit against the attenuation coefficient of water. (7)

Spatial resolution is the ability to distinguish two separate points, when places close together.  It’s usually measured in:

Z-axis (longitudinal spatial resolution): it measures black and white bars which are equally sized (0.5-2 p/MM). It is also responsible for the output modulation in a different frequency to the input modulation in term of image sampling (modulation transfer function).(5)

X, Y-axes (transverse spatial resolution): it is referred to the matrix size and slice thicknesses, which is influenced by the location of an anatomical structure in the iso-centre of the system.

MRI is a non-ionising radiation modality which uses the moving electrical charges and the electromagnetic spectrum to produce a radiographic image. (7) 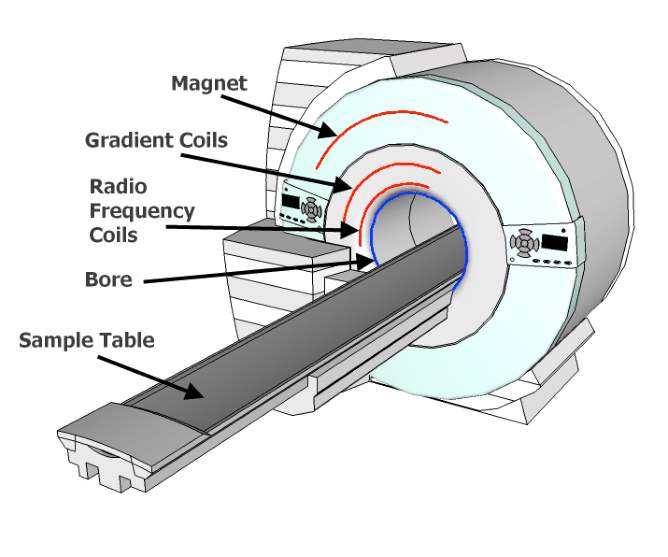 Magnet: superconducting electromagnetic uses in developed MRI that is made by the loop of wire.

Gradient Coil: It provides loops of wire that produce a linear gradation and magnetic field. It has 3 sets of gradient coils in the axial, sagittal and coronal planes that pass an electrical current.

Radiofrequency (RF) coils: These coils are responsible for the transmission of RF pulses into a patient and receiving RF pulses from the patient in the form of signal echoes. There are different types including surface coil, birdcage and body coil.

All living structures are made of atoms and each atom is constituted of electrical orbit and nucleus which have different electrical charges. Isotopes have magnetic properties that can be used in MRI. (9)

Hydrogen is an isotope atom that makes up about 70% of the human body and acts as a dipole (magnetic moments) in the body that randomly orientated. 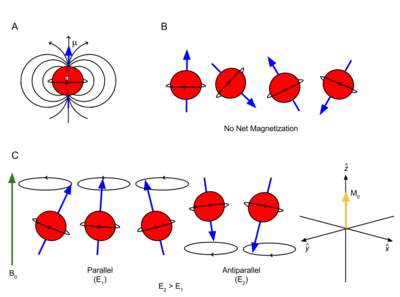 When a body is placed in a strong magnetic field (MF), all hydrogen atoms align with MF either parallel or anti-parallel. Each hydrogen nucleus rotates on its axis and MF producing a secondary rotation at Larmor frequency as well, which is known as precession motion. (10)

Resonance is an energy transfer at the same frequency in an object. In MR, resonance is generated by radio pulse (RF) at 90 degrees to MF. This process causes the hydrogen atom to absorb the energy of the RF and increases the energy in its magnetic motion. As a result, the magnetic vector changes the direction from the Z-axis to the X and Y axis (flip angle). (10)

When the RF pulses are cut off, the vector is influenced by the magnetic field again and tries to realign to its original state, so it must lose the energy that it received from RF pulse (relaxation). The amount of magnetisation in the transverse plane decreases (decay) and in the longitudinal plane increases (recovery). Induction of signal in the transverse plane is known as free induction signal (FID).

T1 (spin-lattice) is caused by longitudinal recovery and giving up the nuclei energy to surrounding it. T2 (loss of proton coherence) is caused by induction of energy between surrounding nuclei. In T1 recovery, the fatty tissues relax faster and appear bright in a radiographic image, in contrast, water relaxes back slowly resulting in a dark appearance in the radiographic image. (11)

The selected individual slice in all gradient generates a frequency shift and phase shift from one end of the axis to the other. So, the system can set and localise an individual image signal by measuring the precessional path position (phase) and receiver coil frequency. This information is now translated, collected and stored in the K space of system computer. (10)

The K space has two axes which are perpendicular to each other:

General and specific advantage and disadvantage of Both modality:

Diffusion-weighted magnetic resonance imaging (DWI) uses a water movement-image that has a much higher sensitivity for the diagnosis of hyperacute haemorrhage. It is a spin echo technique which depends on proton impulsion and can detect chronic microbleeds. In contrast, CT perfusion has better sensitivity in the diagnosis of stroke with the symptoms of arterial occlusion and unspecific neurological deficits. (12)

Stroke causes a significant global mortality rate which is the second cause of deaths worldwide, with a statistic of over 6 million deaths annually. There is no statistical difference between countries which have higher incomes or lower incomes, as the chart demonstrate. (13) 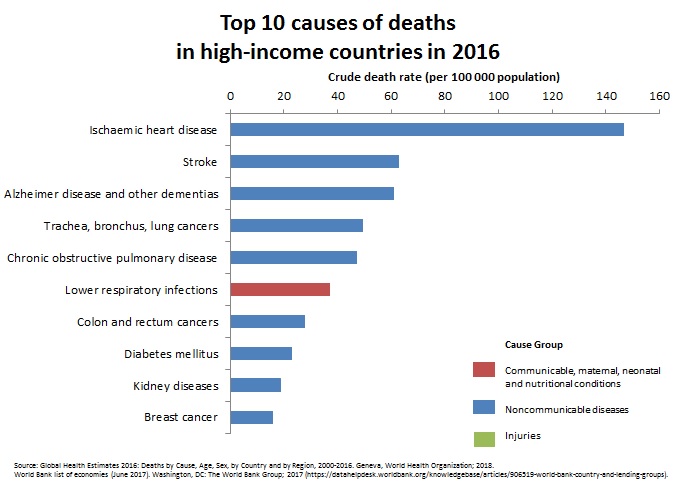 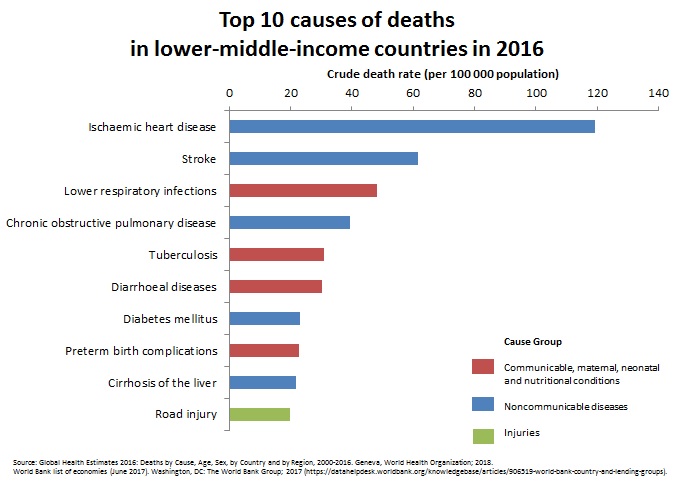 Unenhanced CT is used as the first step to the diagnosis of Haemorrhage (bleeding) and contrast-enhanced CT is performed to a diagnosis of ischemic (clotting). The MRI has more specificity in the diagnosis of small particle and soft tissue related pathology where CT can use for following up a lesion or big structure such as a chest with an air-filled gap. However, it is very important that the patient with the possible stroke specifications and symptoms is urgently referred to the appropriate department and the most accessible imaging procedure must be performed according to the patient's condition and the consultant decision. In some cases, CT scans may be preferred because of patient care (claustrophobic) or natural artefacts such as some heart pacemakers or aneurysm clip availability.

A stroke is a serious life-threatening medical condition that happens when the blood supply to part of the brain is cut off. Strokes are a medical emergency and urgent treatment is essential. The sooner a person receives treatment for a stroke, the less damage is likely to happen.

The following essay aims to critically analyse a randomised controlled trial; ‘Effect of IV alteplase on the ischemic brain lesion at 24-48 hours after ischemic stroke’ by Mair et al.,(2018)....

Affecting nearly 795,000 patients in the United States each year, stroke is one of the leading causes of people, mostly adults, with long-term disability....

Written by: Yung Bing Yong Introduction The brain is the primary organ of the centre nervous system that controls our body and houses our mind. It is metabolically active and dependent on a continuou...