Ankyloglossia, or commonly known as ‘tongue-tie’, is an oral congenital condition that restricts the mobility of the tongue, specifically the tip (Messner & Lalakea, 2002). It is featured by an abnormally short and thick lingual frenulum, which is the band of tissue which tethers the underside of the tongue to the floor of the mouth. The frenulum may be particularly fibrous or muscular, and the connection can be partial to complete (Khan & Sharma, 2017). This abnormality can lead to a variety of functional problems.

Prevalence of this condition has been found to be between 4.2 and 10.7% and 2.5 times more common in males than females (note however, the variance in diagnostic criteria used in the comprising studies) (Bhattad, Baliga & Kriplani, 2013).

The tongue forms approximately 32 days after fertilisation. A V-shaped sulcus develops dividing the anterior two thirds from the posterior third of the tongue, and the tongue becomes mobile, except at the region of the lingual frenulum, where it remains attached (Shaweesh, 2019). Eventually, frenulum cells undergo apoptosis, and retract from the tip of the tongue to enable increased range of motion (Rana et al., 1998). Thus, it can be inferred that disruptions during these stages of development may incite ankyloglossia.

The specific cause of ankyloglossia is not fully known, but reports have shown that mutation of the T box transcription factor (TBX22) gene causing X-linked cleft palate syndrome, can also cause ankyloglossia (Charisi et al., 2017). Epidermolysis bullosa (EB) is another hereditary condition which has been reported to induce the abnormality. EB is marked by soft tissue blistering leading to scarring, which can hence occur at the lingual frenulum resulting in further adhesion of the tongue to the mouth (Charisi et al., 2017). Other genetic syndromes related to ankyloglossia include; orofacialdigital, Beckwith-Wiedemann, Opitz, Simpson-Golabi- Behmel, Pierre-Robin and Van der Woude syndrome (Charisi et al., 2017).

The lingual frenulum is not a distinct midline structure but is an elevated midline fold in the diaphragm‐like structure of fascia across the floor of the inner arc of the mandible (Mills et al., 2019). The midline band originates from the posterior floor of the mouth to or near the alveolar ridge/lingual gingiva, and inserts under the tip of the tongue (Charisi et al., 2017). According to Kotlow (2004), the “free tongue” length (distance between the point the frenulum is attached to the tongue and the tip of the tongue) must be less than 16mm to be classified as ankyloglossia. 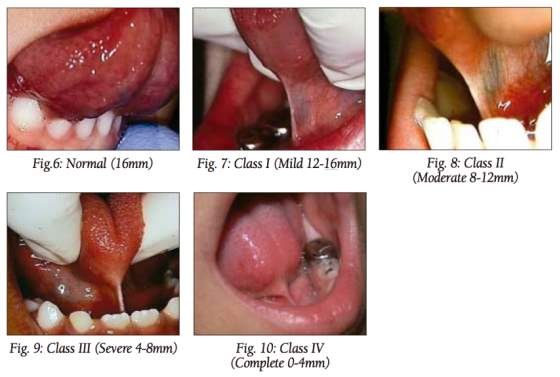 Figure 1. Kotlow classification of ankyloglossia according to tongue movement range.

A study by Castro Martinelli, RL., Marchesan, IR., Gusmão, RJ., Castro Rodrigues, A. & Berretin-Felix, G. (2014), investigated the histological characteristics of altered (or abnormal) human lingual frenulums. Biopsies of 8 children who underwent lingual frenectomy were taken in Brazil, and analyses of four types of frenulums are outlined in figure 5. They also found that “all lingual frenulum types consisted of mucosa lined by a stratified squamous epithelium, and nucleated cells with some keratin granules in their cytoplasm in the superficial layers.” 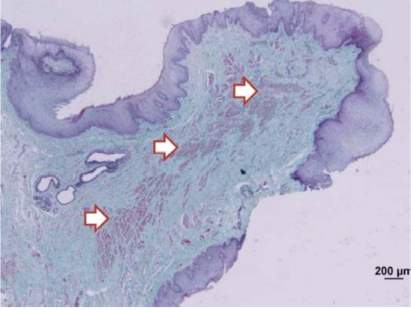 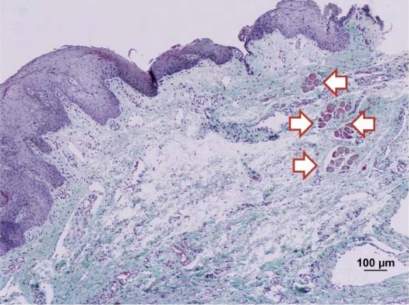 The abundant muscle fibres observed in the ankyloglossia tissue sections could be due to entanglement of the frenulum fibres with the genioglossus muscle, and the numerous type I collagen fibres likely explains the fibrosity of the lingual frenulum and reduced tongue mobility, due to its high tensile strength (Castro Martinelli et al., 2014).

Depending on the severity according to factors including length, elasticity, shape and attachment, the condition can lead to a range of functional impairments. These include speech impairment in which pronunciation of sounds such as “t, d, l, th, s” are impaired due to the inability of the tongue to reach the palatal surface of the upper incisors (Charisi et al., 2017). Eating and swallowing is affected as infantile swallowing patterns also require similar tongue elevation to the palate (Messner & Lalakea, 2002). There is however insufficient evidence supporting a correlation between ankyloglossia and speaking and eating difficulty, and hence is an ongoing argument (Messner & Lalakea, 2000). Ankyloglossia can lead to malocclusion, and specifically open bite, as the upward tongue movement during swallowing becomes a forward thrusting instead, thus pressing the upper anterior teeth up and out. Risk of dental caries and poor oral hygiene is also elevated as the tongue may be unable to sweep and remove food debris, and spread saliva (Charisi et al., 2017).

Ankyloglossia also creates breastfeeding difficulty as it leads to difficulty latching and prolonged feeding, resulting in insufficient feeding. The inability for the child to suck properly also causes pain for the mother (Rowan-Legg, 2015).

However, there exists considerable debate regarding its classification, clinical significance and treatment. In many cases, ankyloglossia is asymptomatic in children, and may even resolve spontaneously as it recedes and thins over time (Bhattad et al., 2013). But in individuals with an apparent presentation of the anomaly, it is difficult to decide especially at a young age whether it will cause significant problems, and whether to manage it with the ‘wait and see’ approach or with surgery. Non-surgical treatment options include tongue training exercises and speech pathology. Surgical options are either frenotomy (frenulum is cut) or frenectomy (whole frenulum removal), however frenotomy is commonly preferred (Charisi et al., 2017). As such, there is still no accepted practical criteria or clinical guidelines for the management of ankyloglossia (Messner & Lalakea, 2002).

Ankyloglossia is a common anomaly occurring during embryological formation of the orofacial region. The appearance and functional effects can be presented in a variety of ways related to the length, shape, elasticity, and attachment of the frenulum, and the mobility of the tongue. There are multiple problems that may result from the condition, and there are several intervention options available; both operative and non-operative. However, the existent diversity of opinion regarding preferred treatment approaches and appropriate age for intervention, is likely due to the absence of common guidelines for assessment and identification, and lack of further knowledge about the lingual frenulum. Thus, more studies on the management of the condition is required.